In general, growth chambers have been used to grow or store plants for research purposes (Wheeler et al., 1996; Austin et al., 2016; Inkham et al., 2019) and to estimate photosynthetic or respiration rates of crops by measuring CO2 concentration (Wheeler, 1992; Rochette et al., 1997). However, few studies have been conducted to calculate photosynthesis rate by measuring changes in CO2 concentration while changing environmental factors inside the chamber. Previous attempts to measure canopy photosynthesis of plants using an open chamber system have been made, but there have been many disadvantages affected by airflow (Garcia et al., 2009). Quantitative analysis of environmental factors most affecting photosynthesis is required when several environmental factors change. In the photosynthetic process of plants, light has a fast reaction rate because it produces an immediate energy capture reaction through electron transfer in microsecond (Rappaport et al., 1998), while CO2 has a slow reaction rate as it undergoes the process of diffusing into the cell through stomata (Evans and von Caemmerer, 1996). When combining the two factors of CO2 concentration and light intensity, it is necessary to determine which should be held constant and which should be changed.

The objective of this study was to formulate a method for establishing canopy photosynthetic rate curves of romaine lettuce (Lactuca sativa L.) in a controlled growth chamber.

Romaine lettuce (Lactuca sativa L., cv. Asia Heuk Romaine) was hydroponically grown in a plant factory module of Seoul National University. Yamazaki nutrient solutions (Yamazaki, 1982) with an electrical conductivity (EC) of 1.2 dS∙m-1 were used in deep-flow technique systems. The photosynthetic photon flux density in the module was maintained at 200 μmol∙m-2∙s-1 with an 8:1:1 ratio of RBW light-emitting diodes (LEDs; FGL-B1200, FC Poibe Co., Ltd., Seoul, Korea). The inside temperature, CO2 concentration, and relative humidity were maintained at 23-25°C, 700- 1,000 μmol∙mol-1, and 65-75%, respectively. Wind speeds around the plants were controlled using an electronic fan at 0.3-0.5 m∙s-1. One hundred plants were transplanted into the plant factory module at three weeks after sowing and grown for 20 days at a planting density of 16 plants·m-2.

Three identical closed acrylic chambers (1.0 × 0.8 × 0.5 m) with adjustable light intensity, temperature, relative humidity, and wind velocity were used for plant growth and CO2 measurement (Fig. 1). The same LEDs used in the plant factory module were installed. For environmental control, sensors for CO2 concentration, temperature, and relative humidity (S-VT200B, Soha Tech. Seoul, Korea) were installed. Indoor temperature and wind velocity were maintained at 19.5-22.5°C and 0.3-0.4 m∙s-1, respectively. To scrub the moisture generated by transpiration, silica-gels were used to maintain the relative humidity at 65-75%. The CO2 concentration in the chamber was measured for 90 min with and without plants at an initial CO2 concentration of 1,000 μmol∙mol-1 using a CO2 analyzer (LI-820, LI-COR, Lincoln, NE, USA). After moving inside air out of the chamber by pump for measurement, the air passed through the sensor was circulated back into the chamber to prevent air leakage during measurement. The ventilation number in the chamber was calculated using the following formula:

Schematic diagram of a controlled growth chamber with Peltier devices for temperature control and a fan for wind speed control.

The response of the growth chamber system was estimated using a time constant measured as the time required to reach 63.2% of the target value (Gross and Chabot, 1979):

where A, t, T, and Y are the mean target value, mean time (s), time constant, and target value after time t, respectively.

1. Fresh Weight and Leaf Area according to Growth Stage

Both fresh weight and leaf area exponentially increased over time. The number of growth stages was five during the 25 day-growth period. Since leaf area and fresh weight did not show much increase from zero to five days after transplanting (DAT), and significant growth was recorded from day 6 to the last day of observation (20 DAT), stages 2, 3, and 4 were classified in five-day intervals. As growth stage progressed, fresh weight and leaf area of the lettuce exponentially increased and reached 97.3 ± 2.94 g and 872.0 ± 44.50 cm2 at 20 DAT, respectively (Table 1).

Table 1. Fresh weight and leaf area of the lettuce at 0 to 20 days after transplanting (DAT).

2. Leakage of the Growth Chamber

For testing leakage of the chamber, CO2 concentration decrement was measured with and without plants while maintaining similar environmental conditions (i.e., 1,010 μmol∙mol-1 CO2 concentration, temperature, and humidity at the same condition, and similar light spectrum). The CO2 concentration after 5,000 sec without plants was 1,010 μmol∙mol-1 (Fig. 2). The calculated ventilation number of the chamber using Eq. 1 was 0.039 h-1. According to Wheeler (1992), leakage rate increases as chamber size increases. Due to the reasons stated above, closed growth chambers in the past have been manufactured in small sizes of 0.19 m3 (Dutton et al., 1988), 0.3 m3 (Knight et al., 1988), and 0.2 m3 (Schwartzkopf and Stofan, 1981). The 0.4 m3 chamber used in this study confirmed that CO2 concentration measurements were adequately carried out. In measurement experiments lasting seven hours or more, there will arise a problem in calculating the canopy photosynthetic rates of lettuce due to chamber leakage. When measuring CO2 consumption for longer periods, CO2 leakage before and after the experiments should be calculated and considered in calculations of canopy photosynthetic rate. In addition, for photosynthesis measurements using custom chambers, it is recommended that the measurements be completed in a short period of time, changing the environmental factors of rapid response.

CO2 concentration changes within the growth chamber with and without plants.

Langensiepen (2012) stated that the response time for plant adjustment will be different for each condition in an artificially-controlled environment. Bazot (2008) indicated that CO2 concentration changes in the atmosphere bring about a complex response in plant physiology. As shown in Figs. 4A to 4D, an average of 550 μmol∙mol-1 CO2 gas was injected for 5 min in all treatments of Treatment 2. The sharp change in CO2 concentration in the chamber within a short period of time (10 min) requires sufficient response time for the plants to adapt to the new environment. Sestak (1971) argued that it would take over one hour for plant stoma to fully adjust to changes in CO2 concentration. To obtain various plant responses depending on CO2 concentration, sufficient measurement time is required.

4. Comparison of Canopy Photosynthetic Rates at the Same Environmental Conditions 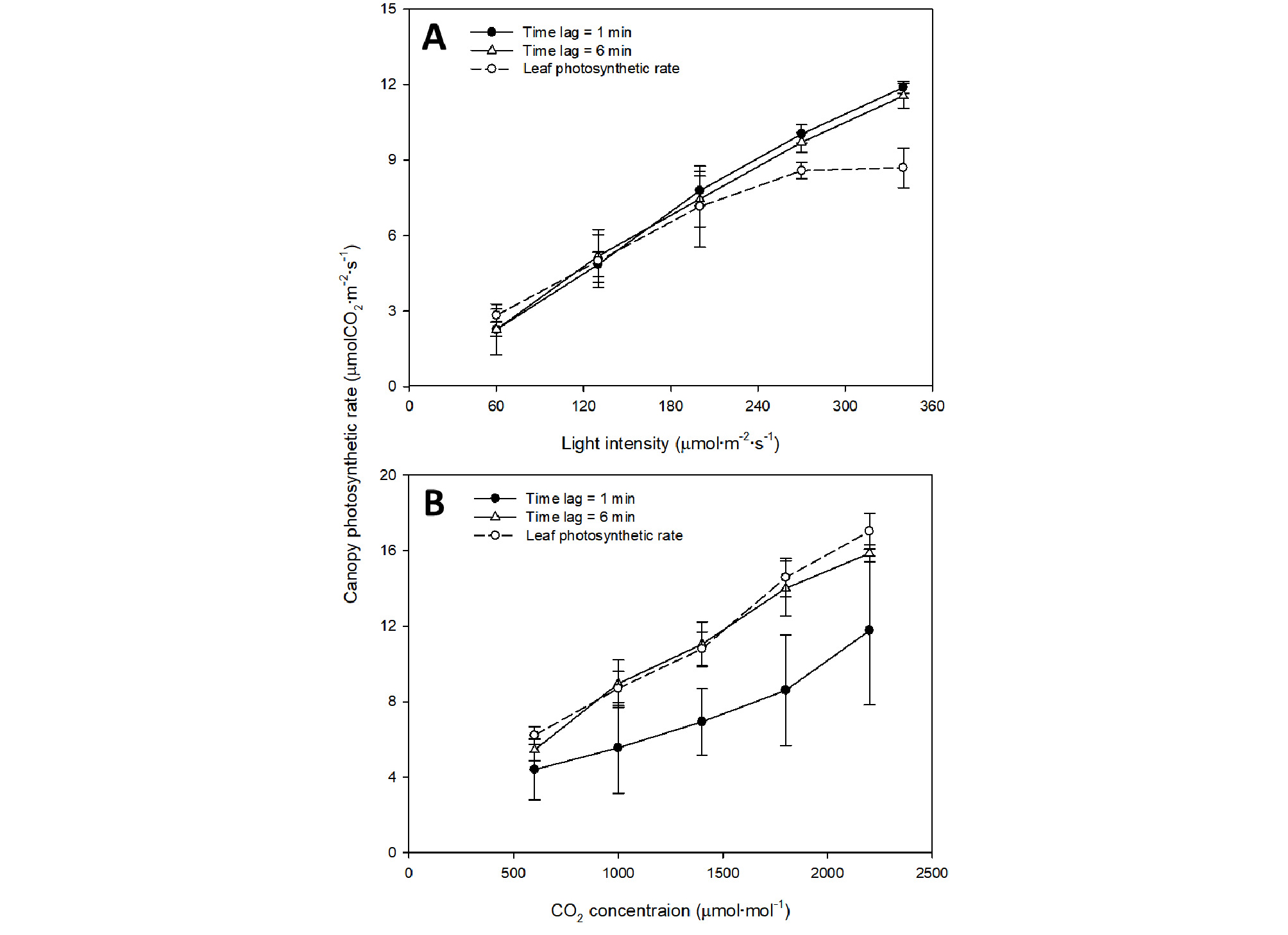 According to the research by Gross and Chabot (1979), there was a time lag of several seconds after the light intensity changed when measuring photosynthetic rates. In other words, light is the environmental factor allowing determination of crop response within a few seconds. According to Creese et al. (2014), the response to stimulation by stomatal conductance is driven by light compared with the response obtained from varying CO2 concentration. When CO2 is a control element, it is difficult to analyze the response by mechanical measurement within a short period of time. Therefore, to obtain reliable data, experiments for each environmental control element must be performed after appropriate time. There are established photosynthetic rate models that include light intensity, temperature, CO2 concentration, and growth period (Jung et al., 2016; Jung et al., 2017). According to Johnson et al. (2010), the canopy photosynthetic rate with increasing light intensity does not appear in the form of a general saturation curve but in the form of a non-rectangular hyperbola curve. This is caused by inconsistent light intensity on the surfaces of all leaves due to the morphological characteristics of the crop. However, the change of CO2 concentration was not influenced by crop architecture in small crops such as lettuces.

The canopy photosynthetic response of lettuce showed a faster adaptation to changes in light intensity, and adaptation to CO2 concentration change required six times longer than that of light intensity (Fig. 6). Therefore, for faster measurements of canopy photosynthetic rate, it is efficient to vary the light intensity at a stable CO2 concentration. Quantification of CO2 consumption using growth chambers will help to establish efficient CO2 enrichment methods for plant cultivation. This can also be coupled with photosynthesis models reflecting environmental factors in plant factories or greenhouses for management of crop cultivation.

Carporn, S.J.M. 1989. The effects of oxides of nitrogen and carbon dioxide enrichment on photosynthesis and growth of lettuce (Lactuca sativa L.). New Phytol. 111:473-481.

Johnson, I.R., J.H.M. Thornley, J.M. Frantz, and B. Bugbee. 2010. A model of canopy photosynthesis incorporating protein distribution through the canopy and its acclimation to light, temperature and co2. Ann. Bot. 106:735-749.

Go to ContentsGo to Main NevigationGo to Footer